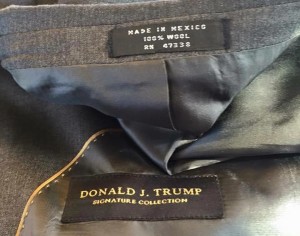 We’ve talked before about the how controversial issues can put brands at risk, but what we’ve seen over the last few weeks is the dramatic implosion of the Trump retail brand. Donald Trump’s controversial speech as he officially entered the Presidential arena has had repercussions across his businesses. Specifically, his point of view on Mexican immigrants has caused the greatest controversy leading to Change.org petitions resulting in divestiture by NBC/Univision (The Apprentice and Miss USA/Miss Universe pageants), quickly followed by Macy’s pulling the Trump line from store shelves. The Macy’s/Trump relationship started in 2004 included better menswear as well as some home products, and Macy’s has featured Trump in its brand advertising as part of its celebrity brand portfolio. The irony, of course, is that the Trump menswear line is manufactured overseas, including Mexico and China.

For years, retail companies have relied on celebrity partnerships to create exclusive product lines that create differentiation in the market. More than other retail brands, Macy’s has used this as a cornerstone of their brand building and has leveraged a cross-section of celebrities to enhance various departments. Celebrities come with a built-in market and following, thereby reducing the friction between awareness and consideration. The flip side, as we’re seeing, is the risk involved when celebrities become focal points of controversial issues, especially on issues that run counter to a brand’s fundamental point of view.

Short term, we expect a hit as Macy’s incurs costs to pull merchandise and liquidate inventory that has been planned over the next six to nine months. They will need to quickly fill in shelf space, and pull any advertising that is in process. Given the long lead times on some marketing tactics, there may be some residual Trump mentions in upcoming ads. Long term, however, Macy’s quick response will help burnish their image as an inclusive brand sensitive to the diversity of their customer base.

One of the biggest points is that, in order to assess a brand, their e-commerce and digital imprint must be considered (in addition to the the brick-and-mortar activity). Consider this; over 700,000 people signed a Move-On petition to demand that Macy’s management pull Mr. Trump’s brand from the assortment. Assume that each of these people spend $100 per year at Macy’s; that equals $70 million of potential lost revenue. The number of people who signed the petition only reflect those who were so angered and motivated to go through the effort. Think of the number of customers and non-customers who were equally appalled by Trump’s comments, but either did not know about it or did not take the time to sign the petition (remember the commercial from the 70s where the message was that if you like a certain product, you’re likely to tell ten friends who will tell ten friends…..and on). Fast forward to 2015: the way the same ad might read today is if you don’t like the product, you may be likely to tell 50 friends who “tell” their closest 200 friends, and on and on and on.  That’s (obviously) due to the fact that we have a powerful social media network which allows us to tell our friends (in the U.S. and globally) that we are unhappy with our experiences.  Although $70 million is a small amount of the annual $25+billion Macy’s and Bloomingdale’s sales, we believe that management made a wise choice in deciding that Donald Trump was not the hill they wanted to die on.  The fall selling season is just around the corner, and it would be unwise for Macy’s management to risk alienating consumers in the important back half of the year.  It is impossible to imagine how much money it would cost to attract these customers back to the brand (if they could at all).  Macy’s is America’s store, inviting all ethnicities, gender preferences, and ages to be a part of what makes the brand fun and exciting.  In our humble assessment, their actions allowed them to dodge the proverbial bullet.

We will be continuing to track these developments, especially with threats of retaliatory lawsuits (which we think is just posturing due to the inevitable morality clauses baked into these relationships). Should be an interesting Summer!

The information contained within this post is the opinion of Mary Epner Retail Analysis and does not provide any advice regarding the purchase, sale or any other transaction in any security. For our complete terms, please click here.